Today David Beckworth has a post discussing his view of the failures of the Bernanke Fed. I mostly agree with it except for a couple of missing details that I feel are under appreciated.

This failure to act is no different than an explicit tightening of monetary policy in terms of damage done to the economy. The only difference is that the public is more aware of the explicit form.

If failures of the Bernanke Fed are being addressed under the heading of biggest failures, perhaps it shouldn’t go without having been said plainly where the endogenous fall in the money supply came from, which, in my view is the single largest failure of the Bernanke Fed. Everything else it did afterward merely compounded the problem, but it is likely understandable in a strange way.

I have written about it here and I’ve thrown the graph below that came from a presentation given by Cristina Romer out a few times to illustrate the enormity of the problem. From the start of the recession in 2007 to about the end of 2008 when IoER was implemented, Fed holdings remained relatively flat. But this graph also reveals that not only was the level of Fed holdings relatively flat, within that flatness is increased bank lending to the point where it looks like the holdings of Treasuries had dropped by about 3/4 not long before IoER went into effect. 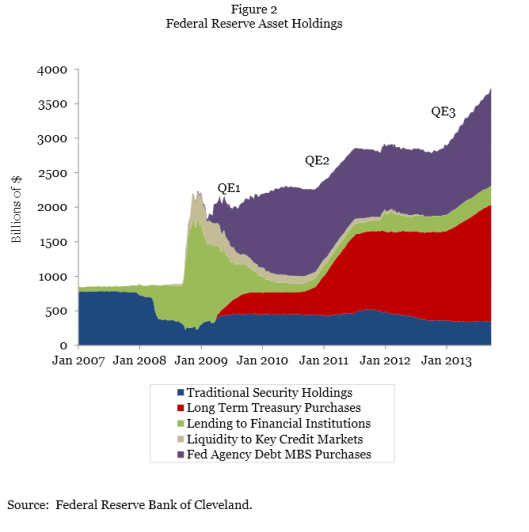 What this looks like to me is that the Fed sopped up a mountain of generally available liquidity and transferred it to the banking system in the midst of the crisis. Then, it decided to implement IoER on top of that. Now one might wonder just how much extra liquidity the economy would need if IoER were implemented in normal times without creating a serious risk to the downside. And rest assured that the economy didn’t have even that.

Given all of this, there is no greater chance than that of a snowball in the big hot place that this was passive tightening.

“You never know what worse luck your bad luck has saved you from.” — Cormac McCarthy, Nonconformist Hall of Famer